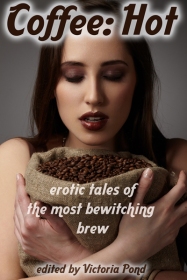 Hope you all are having a wonderful summer.  The Coffee: Hot Anthology is due out on August 4th, and here is the cover!  I love it, don’t you?

I’ll be participating in a blog tour in which six of the authors in the anthology interview each other.  I’m looking forward to that and I’ll be posting more about it as the interviews start coming in.  I’ve never been interviewed about my writing before (or about much of anything – job interviews don’t count).

In between getting ready for the release and working on the first draft of a new story, I’ve been entertaining myself with a couple of things that might be of interest:

I love connected short stories, and Jones’ eight stories all take place in Puxhill, a city where bartenders rub elbows (and other body parts) with goddesses, innkeepers cast spell from ancient books, and comic book shops come with sexy secrets.  The setting is creative, the characters are real, the sex is hot, and you’ll long for more — and a bus ticket to Puxhill.

When eight people from around the world are suddenly connected, able to sense each others’ surroundings and utilize each others’ skills, they have to figure out how to use this synergy and stay one step ahead of mysterious forces who want to disable or destroy them.

I want to call this the “queerest show on television,” but it’s not on TV.  The show starts with two characters in same-sex relationships (including a trans woman in a lesbian relationship), and the sensory connections between the eight blur some characters’ sexuality further as the season progresses.

In some ways Sense8 reminds me of the first season of “Heroes,” but it’s much more character focused as each of the eight deal with personal challenges in their lives that are sometimes simplified and sometimes complicated by their new abilities.  If you enjoyed the philosophical and religious musings as much as the action in Babylon 5, or loved the Wachowskis’ Cloud Atlas film, get yourself a Netflix subscription (there’s a free month trial), and try Sense8. The entire twelve episodes of the first season are available.

My stories are for readers 18+ only unless specified otherwise.

New! "Rule 34" is now out in the anthology Grumpy Old Gods from Storm Dance Books. Kindle only at the moment. This story is suitable for older teens as well as adults.

"Deflowered" was selected to be included in Superlative Speculative Erotica: The Best of Circlet Press 2012-2017, available now in ebook and paperback from Circlet Press and other online retailers!

"Deflowered" in the anthology A Beastly Affair from Circlet Press. Published December 18, 2017.

You can also listen to "Deflowered" as episode 394 of the Nobilis Erotica Podcast.

"Passage, Performance, Passion" in the anthology Like a Spell 2 from Circlet Press. Published October 12, 2017.

"The Ruby" in the anthology Starstruck from Dreamspinner Press. Published September 12, 2016.

"Drink to Seal the Bond" in the anthology Coffee: Hot from Circlet Press. Published August 4, 2015.

Mirrors, the Moon and the Boy" in the anthology Forgotten Menagerie from Storm Moon Press. Published October 15, 2013.

"Fugue in Gold and Fire"in the anthology Dracones from Storm Moon Press. Published May 17, 2013.